10 Amazing Turmeric Benefits And Why Is It So Healthy?

Turmeric is one of the magic herbs we hear so much about but use so little of. You might recognize it by its striking gold color on herb shelves in the grocery store.

Not many recipes call for turmeric, but as the amazing health benefits of turmeric began to unfold, so too did people’s desire to start consuming and incorporating turmeric into their daily lives.

So, what makes this strange, golden herb so healthy? This guide is going to go through the top ten health benefits of eating turmeric and what properties make it such a beneficial addition to our diets.

What Turmeric Is And Why It Is So Healthy

Turmeric looks very much like ginger. We do not use the plant itself, but instead consume the roots of the herb. Like ginger, it has a very noteworthy, bulbous appearance.

In order to make turmeric, we shave and grind the root into a fine powder and then use that powder in various drinks, desserts, and foods. 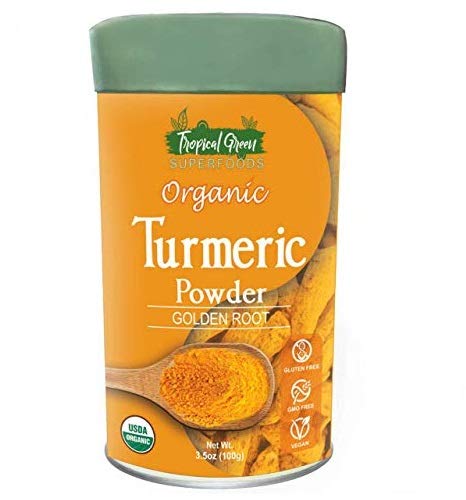 It has an incredibly sharp golden color to it and it stains nearly anything it comes in contact with. So, when you buy turmeric, make sure you don’t make anything on top of your beautiful white counters.

It would be best to keep it on top of a cutting board, or something you don’t mind turning gold.

Curcumin is the main, bioactive ingredient in turmeric. This has strong anti-inflammatory and antioxidant effects and is the most powerful part of the turmeric herb, even though it is only 3% of the root.

The root of any plant or herb has a plethora of beneficial vitamins in it. Turmeric has Vitamin C, Vitamin E, Vitamin K, along with potassium, copper, magnesium, zinc and calcium. It is also high in protein and dietary fiber, all incredibly wonderful things for your body to digest.

All Of These Ingredients Make For One Powerful Healthy Cocktail

This guide is going to pick through each of the scientifically backed Turmeric benefits of regularly consuming turmeric. It will rate the benefit out of 5, with 5 being the most potent, unique and powerful side effect of consuming this herb.

So, what exactly does turmeric do for your health? Here are the ten proven and amazing health benefits of this amazing herb:

The main reason it has an effect on the growth of cancer calls is due to the curcumin, the major bioactive ingredient in turmeric. This curcumin is being looked at as possibly being used in future treatments for cancer patients.

It also has a documented effect on prostate cancer. In fact, a study done on 44 men with lesions in which each man was given 4 grams of curcumin a day revealed a drastic drop in lesions, some by almost 40%.

Curcumin does this by battling the cell on the molecular level. How and why it has such a noticeable effect on cancer cell growth is relatively unknown, however, but if you are looking to incorporate something that will help protect you against potential cancer, this is a good herb to add to your diet.

Various studies have shown that a daily dose of curcumin can help delay or completely offset the onset of Type 2 diabetes.

All of the patients that took part in this study had prediabetes. Over a nine-month period, these participants were given either a curcumin tablet or a placebo.

This is all due to the amazing inherent benefits of turmeric’s anti-inflammatory properties. These helps reverse the damage done to blood cells over time due to oxidization.

As consumption of turmeric reduces inflammation, so too does it reduce cholesterol. It does so by promoting efficient blood circulation, so vessels stay clear and healthy.

This reduces blood pressure, which in turn reduces cholesterol.

It also has a direct impact on your triglyceride levels and overall LDL cholesterol. In studies where rats were fed incredibly high-fat diets and then given a steady dose of turmeric revealed that the herb had a direct effect on cholesterol levels.

This is, once again, due to the wonderful bioactive ingredient called curcumin.

Although it does have a direct impact on cholesterol levels, that impact is a rather small one. Including turmeric in your diet could have a large impact on your health only if you add a rather large amount or take it as a supplement.

Turmeric also has some amazing healing properties. Turmeric benefits work by reducing the body’s natural reaction to cutaneous wounds, such as small cuts and lesions.

The body, when injured superficially, has a various set of inflammation and oxidation responses, and turmeric works to mitigate those natural responses. It enhances the body’s ability to produce new tissue and also works to remodel tissue, all while reducing harmful inflammation.

This only works on superficial skin wounds. It is usually incorporated in a salve of some sort with other ingredients that also aid in mending skin damage and inflammation.

In this society plum full of various deep-fried foods and unhealthy dietary options, it is easy to put on the pounds. In fact, it seems that the busier you are, the more apt you are to put on weight.

It is a work and culture problem of stress and poor nutrition that makes battling weight gain a difficult task.

Incorporating turmeric into a healthy diet can help you fight those pounds in a healthy way.

There are studies that prove that turmeric’s number one bioactive compound, curcumin, plays a large role in enhancing your body’s ability to burn fat.

Cultures where turmeric is a major component of the diet are often thin, despite the fact that they consume far more calories than a dieting westerner. Countries like India and Thailand both have relatively healthy, and thin people.

This is due in part to the amount of curcumin in their diet. In short, curcumin enhances the fat cell’s ability to absorb insulin.

Here is how increased insulin absorption helps keep us thin. The more insulin your fat cells can absorb, the less insulin your body produces and has floating around freely in your system.

When you have a surplus of insulin, this activates the enzyme LPL, which makes your blood sugar skyrocket, which in turn entices your fat cells to store more fat.

Turmeric benefits make your body more efficient at processing and burning fat, a perk a great deal of us wouldn’t mind.

If you understand how arthritis works, then understanding turmeric’s role in relieving arthritis is evident.

For a simple description, however, arthritis is the result of irritated joints that are inflamed after years of wear and tear.

It is a disease that usually comes on with age, an almost inevitable part of consistent use.

It is so effective that it is used in dog medicine as well. It is common to see curcumin as a major ingredient in joint pain relief for dogs.

A large part of its immune system properties come from the plethora of vitamins and antioxidants.

Vitamins A, E, and D are all plentiful in turmeric, along with antioxidants that work wonders for your immune system.

It is also thought that curcumin can help repair muscle damaged as a result of intensive exercise or movement.

Due to the number of antioxidants and anti-inflammatories, turmeric benefits have a profound impact on our brain.

Once scientists realized that the population of India had very low rates of Alzheimer’s disease, professionals began wondering if there was any connection between this trend and the large amount of turmeric in their diet.

So, they launched a study that looked into the benefits of turmeric, or more importantly, curcumin, on the brain.

What they found is that curcumin, once digested and consumed at sufficient levels, enters the brain and actively destroys the compounds called beta-amyloid plaques that have a direct correlation with Alzheimer’s.

The more these plaques accumulate, the more likely the irreversible effects of Alzheimer’s set in.

Furthermore, when the brain is exposed to a substantial number of antioxidants and anti-inflammatories, it is a generally healthier machine. Anti-inflammatories reduce the risk of brain disease in general, and anti-oxidants encourage new neuron cell growth, called neurogenesis.

Your liver is not only stressed by drinking, it can also be put under a great deal of stress depending on the fat content of your diet. The more fat, the more your liver has to work to process that food.

This, in combination with a consistent supply of alcohol can put your liver at risk. Turmeric, or curcumin, was recently found to play an active part in cleansing your liver.

In a study conducted in South Korea, scientists found that curcumin protects the liver from the effects of a high-fat diet substantiated by consistent alcohol consumption by modulating the metabolic pathways.

Essentially, it protects your liver from inevitable damage by managing enzyme activity, or wear-and-tear.

The findings have led scientists to experiment with various ways they can use it therapy for patients suffering with liver disease.

Last but not least, is turmeric’s role in improving your digestive system.

Besides curcumin, this herb has various compounds, such as borneol, caffeic acid, eugenol, limonene, and protocatechuic acid. All of these either stop the production of gas caused by bacteria, relieves gastrointestinal pain, and reduces symptoms of acid reflux.

In a recent clinical study, it was proven that given a week of steady turmeric intake, participants suffering from gastrointestinal upset found substantial relief, while those took the placebo did not.

Think of turmeric as the oil in a car, fine tuning the system as it travels through.

What To Look For To Enjoy Turmeric’s Benefits

Overall this herb has amazingly wonderful properties that have a whole host of benefits not only for your body, but for your mind as well.

It is a simple root with a bright golden hue, popular in global cuisine for a reason. It stimulates the best parts of our brains and bodies, so we run more efficiently.

Make sure when buying turmeric that you go with organic and sustainably grown herbs. This is not only for the sake of the environment, but for the integrity of the herb itself. The more naturally it is grown the more benefits it holds.

If you don’t particularly like curry but want some more of its health benefits in your life, there are a plethora of supplements available.

Hope you will consider making turmeric an active part of your diet. Your body will not regret it.

Health Quote Of The Day