5 Actual Health Benefits Of A Himalayan Salt Lamp For You

A recent trend in healthful living are Himalayan salt lamps. If you aren’t too familiar with this trend, they are a beautiful light-pink salt rock that is made into a lamp. They give off a calming golden glow when lit.

Their popularity has boomed as of late not only for their aesthetic, but also for their supposed health benefits.

Himalayan salt lamps come with some amazing, but unsubstantiated claims. Some say it increases the serotonin production in your brain while also reducing asthmas symptoms. Others say is also enhances your body’s circulation in addition to cleaning their air in your home.

Knowing that a small salt lamp can only do so much, we decided to pick through the various health claims to determine which are true and which are pure speculation fabricated for the sake of advertisement.

This guide will help you determine whether or not buying a Himalayan salt lamp is worth it, while also giving you the tools to determine who is honest in their sales mantra.

How Does A Himalayan Salt Lamp Work?

These lamps work just like they sound. They are large chunks or pure salt mined from the Himalayan mountains in the Punjab region of Pakistan and northern India. These large chunks of pink salt are carved into hollow forms that are then made into lamps.

Salt is naturally hygroscopic, which means it absorbs and attracts H2O. So, a Himalayan salt lamp will absorb water molecules floating in the air throughout your home and the potential chemicals in said molecules.

In this way, it cleans the air surrounding it. This is why it is suggested you wipe down your salt lamp a couple times a week. Depending on how dirty the air is in your home, the lamp’s ability to absorb water will be impeded by how much it collects.

You are probably asking, what are negative ions? Simply put, ions are positive or negatively charged atoms or molecules. Depending on your environment, at any given moment, there are ions floating through the air.

What do they do for us, however? Negative ions increase the flow of oxygen to the brain. An increased flow of oxygen means we are more alert, centered and focused. This is why most of us have a natural affinity for beaches and waterfalls.

They are also reported to protect against harmful particles in the air that can cause asthma by reducing irritation.

So, it is theorized that salt lamps produce these same negative ions, which would substantiate the claim that they reduce symptoms of asthma and give you the feeling of centered calmness.

We now know that salt lamps are both hygroscopic and that they produce negative ions. How true are both of these claims, however?

It is not an exaggerated fact that salt itself is hygroscopic. That is how salt is naturally formed and how it functions.

So, a claim backed by science is the fact that these lamps can indeed absorb harmful allergens, bacteria, and other chemicals floating around in your house.

These lamps do not have a large surface area, however, so how much water they can absorb from the air is entirely dependent on their size on how much you clean them.

They do not act as the ultimate air filter, according to a great deal of advertisers. They will absorb some of the irritating particles in your home, but the effect is minimal.

They May Or May Not Be Negative Ion Producers

It is relatively un-tested by science whether or not salt lamps produce a substantial number of negative ions. They may produce some, but again, given their size, the effect would be minimal compared to a relaxing trip to the beach or waterfall.

Nature is, by far, the best place to find an ample of negative ions to increase blood flow to the brain.

The claim that salt lamps increase the level of serotonin production in your brain is ultimately speculation, and most likely due to the theory that they produce negative ions.

So, don’t believe the wild claims that they have a direct impact on your mood and the chemicals in your brain that are responsible for a general feeling of happiness. This is ultimately hogwash used to make honest consumers more apt to drop money on this product.

What A Himalayan Salt Lamp Is Good For

Overall, a Himalayan salt lamp is an addition to your home that will bring with it an overall sense of calm.

It has a natural golden glow that makes you feel like you are sitting in front of a crackling fireplace.

If you are tempted to buy a salt lamp however, here are the actual benefits it will provide for you and your home.

1. Absorb A Small Number Of Harmful Allergens Out Of The Air

Due to salt’s natural hygroscopic properties, a small salt lamp will absorb a correspondingly small amount of water out of the air.

It won’t make a noticeable difference on your actual asthma symptoms unless you have a relatively large salt lamp in every room of your home.

In this case, you might notice a relatively powerful difference in your asthma. Think of Himalayan salt lamps as filters. The more you have, the cleaner your air will be.

Since a majority of the studies on negative ion’s effect on the human brain are inconclusive, the most provable direct impact on our health would be the low-light environment they create.

It has been proven that sleep is deeper and more rejuvenating when you are in a low-lit environment, and if you use salt lamps to replace your brighter lights, then sleep might come easier than normal.

Last but not least, these are great decorations for any home. They are unique, last for decades, and ultimately beautiful lamps that can be added to nearly any internal design.

If you are looking for something to add a little spice to your home décor, these are great options. You can get a solid salt rock lamp, of a basket of chiseled Himalayan Salt pieces.

What to Look for When Buying a Good Salt Lamp

If you are interested in buying a lamp despite the fact that their health benefits are widely exaggerated, here are a few things to look for during your shopping adventure.

The darker the lamp, the purer it is. Pure Himalayan salt will have a rather dark orange appearance, so avoid lamps that are a really light pink. 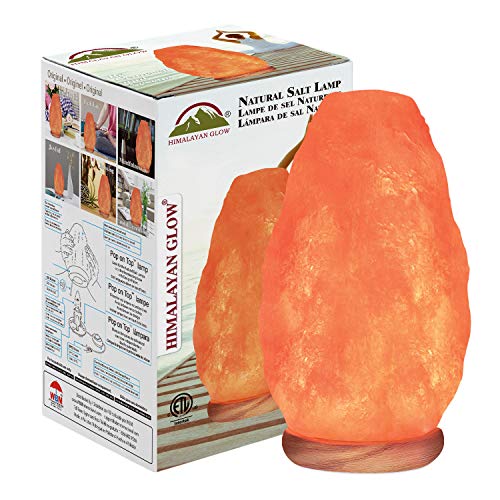 Also look for a lamp that is large in surface area and is relatively rough. A rougher surface means that the lamp is more hygroscopic. The more water it absorbs, the more potential harmful allergens it may absorb out of the air.

Last but not least, make sure you use a heat producing bulb in the lamp itself. LED lights, although more efficient than the traditional alternative, do not produce heat when lit.

This is important because salt can only be hygroscopic if it is heated. So, make sure you use a bulb that will maximize what health benefits this product has.

It Won’t Fix All Of Your Health Problems

All in all, it won’t be a miracle worker in terms of your health, but it will be a wonderful addition to your home.

They have become famous for a reason, and that reason is the pure, calming aesthetic of the lamp itself.

Don’t pay more than you are willing to pay for any lamp. They are beautiful, but ultimately not worth a large chunk of your well-earned money. If you are looking for mood lifters, take a free walk outside next to some running water and get out into the sun!

Health Quote Of The Day